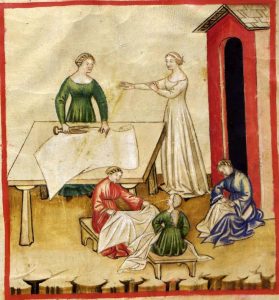 Hemp and linen fabrics are amazing materials; they are friendly towards the environment and have been in use for thousands of years. They are more hard-wearing and absorbent than cotton, and will dry quicker. Undyed hemp and linen fabrics age most gracefully, acquiring a soft and supple quality that will bleach naturally to a golden white shade.

Handelsgillet has carefully selected a number of hemp and linen fabrics which we consider apt for historical reenactment of the Iron Age, Viking Age, Middle Ages and more recent periods. There is more information on the suitable uses of the various fabrics if you take a look in their respective categories, and on the individual fabric pages.

Both hemp and linen has been used for clothes such as shifts, shirts, breeches, wimples and veils. During the Middle Ages it was almost exclusively used for underwear, but in earlier times, as well as later, linen and hemp were also used for other types of garments. Sturdier fabrics were used, among other things, for aprons, padded armour and tents. Linen and hemp were also used for towels, bed linen and other soft furnishings.

Read more about How to wash hemp and linen, History, Dyeing, Bleaching, Properties, Cultivation and Manufacture

How to wash hemp and linen

Linen and hemp consist of cellulose fibres which naturally contain lignin, a glue-like organic substance. Because of this, there are a few things that should be taken into account when you wash linen and hemp fabrics.

Broken fibres – cellulose is wood; imagine a small twig or a blade of grass, and you will understand why it is not a good thing to break the fibres. This in turn means that tumble drying is a death sentence for hemp and linen. On the other hand, both fibre types are about 20% stronger when wet, so you should soak the fabric for approximately 4-5 hours before you wash it. Try laying fabrics and clothes out as flat as possible in the water – this will help the fibres retain their straight shape. For the same reason, hang your items to dry afterwards, as this keeps the fibres straight.

Heat – do avoid excessively high temperatures, as the heat dissolves the lignin and weakens the fibres. It is enough to wash the fabric at 60 degrees. When (and if) ironing, steam is best avoided, and instead you can dampen or moisten the fabric first, and then iron it without using steam. The best option is cold mangling, which leaves the fibres flat and strong, with a high shine, thereby extending their lifespan. In the Viking and Middle Ages, slickstones were used for the same purpose.

The one exception is pleated garments, represented among extant finds from the Viking Age, and found in Birka, among other places. If this is what you want, you may take advantage of the “crinkle memory” of hemp and linen; pleat the fabric and then place it in hot water to make it beautifully pleated when dry. Read more about pleated linen garments.

We know that hemp and linen fabrics have been produced on the Continent for at least 4 000 years. In Scandinavia, there are archaeological finds – seeds and retting pits – which indicate that flax has been processed here since the Bronze Age, approximately 1 000 B. C. Hemp has been produced in Scandinavia since at least 200 A. D. The use of hemp and linen may have begun much earlier through import, but there is no archaeological proof of this. Unfortunately, plant fibres such as hemp and linen are not preserved in the earth except in rare cases when conditions have been just right.

During the Middle Ages, we know that flax production was concentrated to the north of Sweden, in the provinces of Ångermanland, Medelpad and Hälsingland, as this area yielded good crops, with long, greenish fibres which provided cloth of a fine, soft quality. Church tithe was often paid in linen fabric, and from 1300 onwards, the farmers of the Hälsingland province were given the right to pay their taxes in linen, too.

Hemp was primarily grown in Mälardalen, the Dalarna province and on Gotland during the Early Middle Ages, and was counted as one of the six most important crops; flax, hemp, beans, peas, wheat and rye, according to the Västmanna and Östgöta laws. A text from 1758 states that the seed for sowing is the same as that in the rest of the country, meaning hemp, barley, rye, wheat, oats and peas.

You may get the impression that hemp textiles have had a slightly inferior status compared to that of linen fabric, as it is mainly linen textiles that arise as trading goods in preserved contemporary sources. In the 18th and 19th centuries, hemp tabby is referred to as something worn in rural parishes, while linen tabby is worn in the city.

Sources mention various hemp qualities from the 16th and 17th centuries, such as Harden, a coarse fabric made from tow, with many short fibres. This was frequently used for bed linen. Other qualities are Hessian and Hessons. Dowlas and Canvas were hemp fabrics imported from France, among other places. In the Swedish provinces of Jämtland and Västerbotten, 18th century sources mention Strige, a fabric made from short, combed hemp fibres.

Linen blends are mentioned too, such as Linsey (13th century), a locally produced fabric with a woolen warp and linen weft. Fustian was considered extra hard-wearing, a coarser twill with a linen warp and cotton weft.

Until the end of the 18th century, linen and hemp remained among the most important goods produced in Europe, before they were superseded by cotton. The Scandinavian production decreased significantly in the 19th century, when the competition from Russia became too strong.

There are Viking Age finds of linen fabrics dyed with madder and woad, which were probably status symbols, as the finds originate from the graves of the wealthy. In graves at Birka (Björkö), Sweden, and in Pskov, Russia, finds of dyed linen fabrics have been made, mainly in blue. In Pskov, fragments of linen loops dyed blue were found inside tortoise brooches, which indicates that the woman buried in the grave wore a linen dress that had been dyed blue. In Birka, the finds indicate that dyed linen has been used in apron skirts. Garments made of dyed linen could, therefore, be used by those of high status.

There are a few Medieval finds of dyed linen, but they all have slightly peculiar contexts, which is why we consider dyed linen unsuitable for making Medieval garments. However, it can be found as blue stripes as seen on linen towels, pillows and similar soft furnishings.

Plant fibres consist of cellulose, which is hard to dye and rarely displays colour fastness. However, there are a few dyes that will work for linen and hemp. Indigotin, found in woad and indigo, will work well, as it is a vat dye. Vat dyes are dyes that require a reducing agent such as iron sulfate or sodium thiosulfate to solubilise them into a colourless compound (indigo white), which can be dissolved in an alkaline vat. Fabrics or yarn that are dipped in the bath will turn blue when exposed to the air, as the dye reverts to its insoluble form through oxidation. Madder has been used, too, but requires a different process which involves galling with tannines in order for the fibre to properly take the red dye.

Linen bleaches naturally into white with washing and exposure to sunlight, but to make spotless white fabric was a labour-intensive process. There is evidence of chemical bleaching of linen since the Roman period. The linen fabric was bleached with the aid of various naturally occurring bases such as wood-ash lye and ammonia obtained from urine, and was laid out for bleaching in the sun for as long as two weeks. Therefore, it was an exclusive fabric that only the rich could afford. During the Viking and Middle Ages, it was mainly people of high status that used this kind of fabric.

Flax and hemp fibres are very similar in appearance and properties, which frequently causes the two to be confused for one another in archaeological materials. Examination of finds by polarized light microscopy (PLM), has forced the reinterpretation of many extant linen finds, proving to be hemp. Only a fraction of the classified finds have been examined with PLM, so it is difficult to obtain a comprehensive idea of how widespread the use of hemp has really been. It can be concluded, however, that the use is very much underestimated.

The fibres are cellulose and therefore slippery and somewhat stiff and shiny. They are very resistent to sunlight and UV, and have very little elasticity. Linen fibre can be stretched about 3% before breaking, hemp even less. Hemp has longer fibres than linen, which, in combination with the lack of elasticity, explains the popularity of hemp for sail- and ropemaking. Hemp and linen have excellent hygroscopic properties, that is, they quickly absorb moisture, and are quick-drying. Hemp is considered slightly more rot resistant, which explains why it was also used to make ropes, sails, sacks and other items. However there is no hard evidence for this quality.

Depending on local conditions, flax or hemp has been cultivated in different places throughout Scandinavia during the Viking Age and Middle Ages. Hemp requires soil that is rich in lime, while flax thrives in loamy soil, rich in moisture and with an even water supply. Qualities of the water would also affect the location of flax cultivation, as water with a high iron content affects the retting process unfavourably. During the Middle Ages, seed for growing flax in the north of Sweden was imported from the Baltic states, among other places, about every three years. This interval was likely due to a decline in seed quality after growing in Norrland, perhaps as a result of the brief growing season, or some epigenetic cause.

Hemp is easily grown and requires no pesticides. It is fast-growing and weed-resistant. Hemp is also efficient for lowering carbon dioxide levels, absorbing more carbon dioxide during its growth than what is emitted during the production phase. These qualities makes it very environmentally friendly.

Both hemp and linen fabrics are labour-intensive in their production. First, the plants must be harvested by hand-pulling to maximise the fibre length and to prevent rot in the fibres. Next, the harvest must be retted in pits, after which you dry, break, scutch, hackle and brush it into what can finally be spun into thread. For brushing, combs similar to wool combs were used, but with tines of different length and spacing for the various stages of brushing. To spin and weave linen and hemp fabrics, a cool and damp workplace was ideal, as this prevented the fibres from breaking. Pit-houses are believed to have been used for this purpose during the Iron Age.